The DU Amache Project strives to responsibly research, interpret, and preserve the physical remains of Colorado’s World War II Japanese American internment camp.  This work happens in the field, through archaeology at the site and community consultations, in the museum, with collections management and exhibits, and in the classroom, where students learn to analyze and interpret recovered objects.  Unlike many other archaeological sites, Amache has survivors, individuals who remember their time of confinement.  Thus it provides a rare opportunity for an intensive community-engaged archaeology.  A primary goal for the project is to foster collaborative, synergistic explorations of the past and its meaning in the present among students and stakeholders. We also strive to grasp the opportunities the project opens up for public dialogue about many of our most pressing civic concerns, especially one that has been in the forefront of late—the fragility of democracy in the face of racism. 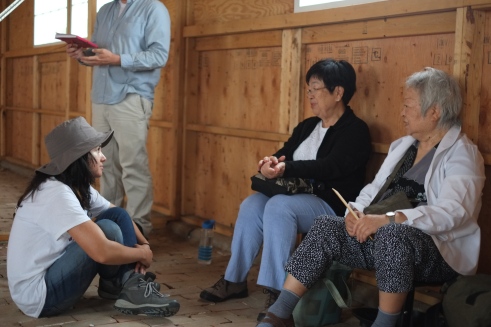 In 2016, the Anthropology Department began another cycle of field and laboratory research, followed by public interpretation. The field school at Amache was once again organized on a collaborative model.  Using funds from the Public Good grant, we were able to support a high school student whose grandfather interned at Amache.  Halle Sousa, our community intern, combined her experience at Amache with training in documentary filmmaking to produce a film, shot in part during her time with us at Amache.  That film, called Amache: Never Forget, is available here.  We also were joined by three local high school interns from Granada High, our largest number to date.  These students learned valuable skills in archaeology and museum work, as well as forging bonds between our two most important Amache stakeholder groups – the Granada community and the Japanese American community.

We were also very pleased to be joined by three former Amache internees, who worked as volunteers for one week of the field school season.  Two of these Amacheans were joined in the field by family members who also volunteered.  One other community volunteer, a professional gardener and descendant of Amache internees also joined us.  These inter-generational experiences were especially powerful ones for our volunteers.  As Greg Kitajami wrote of his experience, “The flood of emotions that I experienced standing in the exact spot where my mother’s family was housed was pretty overwhelming. I also had the opportunity to meet and hear stories from other internees, two of which had very vivid memories of camp.” (Greg Kitajami’s full blog is available here).  Funds from CCESL were used to house all of our community volunteers. 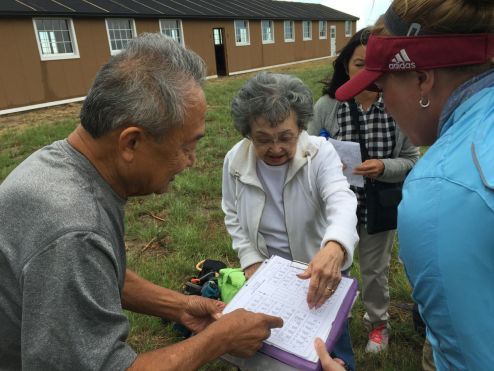 Former Internees Work Outside the Barracks

For the second time, we held a “community open house” geared specifically to former internees and their families.  Including those who were working with the crew, we had about 40 community members in attendance.  Visitors were able to tour their former barracks, see our work in the field and museum, interact with the students, and get to know one another better.  It was a great success, one we hope to replicate in the future.  Likewise, we also held a very successful public open house day, with at least 80 participants from across the state. 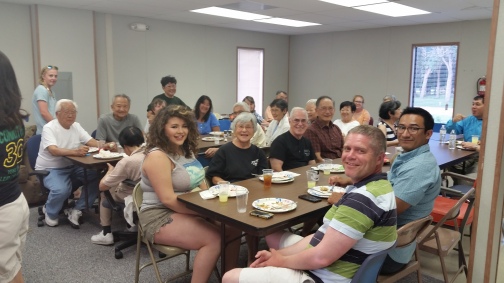 After the field school our collaborative work continued, much of it geared to the production of a museum exhibit, Connecting the Pieces: Dialogues on the Amache Archaeology Collection. In Fall Quarter of 2017, fifteen undergraduate students enrolled in my Advanced Seminar, “American Material Culture.” Pairs of students were teamed with a member of the Denver area Japanese American community to co-curate objects from Amache for the exhibit.  Teams met in person on the DU campus and over the course of two hours learned more about each other and their chosen object through a guided discussion. The dialogue that took place during the meeting brought out the significance of this history and under girded the individual narratives prepared by each curator.  Feedback from both student and community curators suggest creating the exhibit was enriching and engaging.  Public Good funds covered the costs of the original exhibit production, and supported a graduate student who worked with the teams to produce the exhibit design.The collaborative elements of the DU Amache project create a valuable synergy that benefits the university; its students, faculty, and staff; the Japanese American community; and the public as a whole. 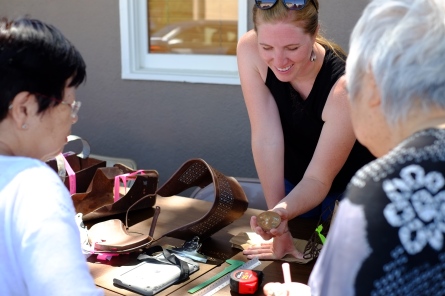 Students and Internees Curate Objects for the Amache Exhibit