By Jimmy Hessler, Sociology and French

Fifteen potential first-generation college students from Jackson, Wyoming joined Jimmy Hessler, a senior undergraduate Sociology and French student and Community-Engaged Fellow on campus to explore college access over spring break. All the students involved in the trip were either first or second year students from Jackson Hole High School, and all are first or second generation immigrants from Mexico. Most importantly, all aspire to go to college. 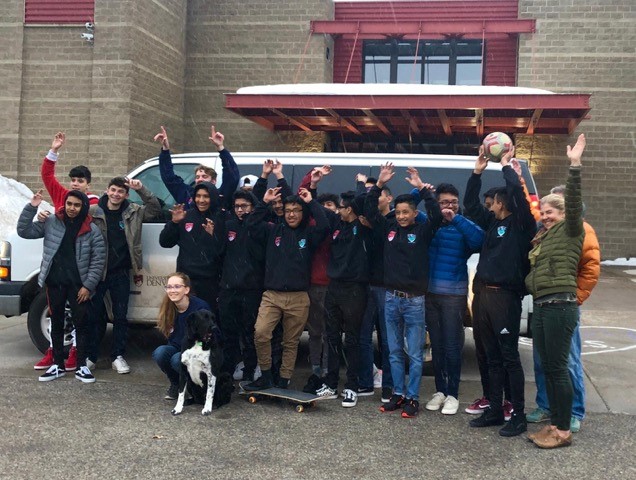 CSC Soccer Players Gear Up to Come to Denver

Throughout the trip, the group visited the University of Wyoming, the Community College of Denver, and the University of Denver (DU), to glimpse into the realities of a public university, a community college, and a private university. While at the University of Denver, students participated in a theatre workshop put on by Theatre student Izzy Chern, a panel with eight DU professors from diverse subject areas, a panel with first generation students and student groups, and an individual mentorship activity with 15 current DU students. The main objective for the trip was to debunk the mystery of college, and give these students the confidence and resources they need to believe that college is a possibility. So often young students are pushed off of the college path not because it’s truly impossible, but because they are told it’s impossible, and thus don’t take the necessary steps to make it a reality.

In Jackson, a large immigrant population sustains many industries within the tourist economy including construction, landscaping and hospitality. Especially over the past decade, Jackson has seen a large increase in their latinx school-aged population as immigrants have settled down and created families, resulting in an array of social phenomena that were before unknown to Jackson. These include a quiet social disclusion between the latinx and the rest of the Jackson population (in both adults and young people), lack of access to athletic and experiential opportunities for families with low socio-economic status, and academic challenges for both the school system and the latinx students as they struggle to understand each other and work together.

That is why, in 2016, Jimmy Hessler and Miguel Cortes, longtime friends and residents of Jackson Hole, created the Community Soccer Camp or the CSC, a project that began to give youth the chance to enjoy soccer over the summer, and inevitably evolved into much more. Jimmy and Miguel grew up in different worlds; Jimmy in the suburbs of Boston and Miguel in the projects of Léon, Guanajuato, Mexico, but soccer gave them the wisdom to look past their differences and begin to grow together for the betterment of their shared community. The Denver College Access Trip was essentially the culmination of four years of work building relationships, trust, and experience within both the Jackson and the University of Denver communities, and a desire to pass on experience, knowledge and resources to a younger generation of students so they may open their eyes to the possibilities before them. What has been achieved with the Denver College Access Trip is a major victory, but is only the beginning. The hope is that the trip may be like the falling of small stones that starts an avalanche in the mountains, giving these young students the momentum they need to make the right decisions at the right times to open the doors to college, but whether this happens or not lies in their desire, motivation and perseverance.

CSC Soccer Players Ahead of a Game